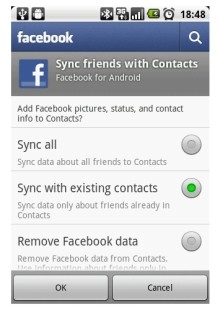 Google and Facebook have never been all-out rivals, but a new turn of events makes it seem as though Google is starting to feel the pressure mounting from Facebook, and this time Google has set the ball rolling.

When the Nexus One and the Nexus S were first launched, they provided users with the ability to ‘Sync Friends with Contacts’. In other words, when Nexus handset users downloaded the Facebook App, the details of their Facebook friends, including their phone numbers (where available) were stored in the Google address book.

A user’s contacts from Google as well as from Facebook were, therefore, very well amalgamated with each other, making it is easy for users to access their friends’ details whenever they wanted to.

Now, Google has decided to discontinue this feature from the Nexus S. Once this sync feature is removed, Facebook contacts will be visible in the Facebook App but will not be integrated with the Android Contacts App.

Another strange aspect to this move is the fact that the sync feature will continue to exist on the Nexus One handsets, because, according to a Google spokesperson, “the Nexus One was preinstalled with Facebook”, so users would expect the integration of the two apps, which is not the case with the Nexus S. Google has also clarified that the sync feature will not be available on any future devices they launch.

The main grouse that Google has with Facebook is the lack of portability. While Facebook allows the import of data, it does not allow export, thus making the interaction with other sites a one-way deal. In other words, the availability of contact information from Facebook relies entirely on the connection between the two contacts, and could be lost from the Google Contacts App when a user breaks a social connection on Facebook.

While this is an internal problem between Google and Facebook, and should have been sorted out professionally by the two organisations, it is the users who will miss out on the convenience of having their mobile and social apps interconnecting.

The reasoning that Google has offered for this discontinuation is quite strange. They say, that if a user ever decides to quit Facebook, he will lose all this data. So they have decided to discontinue it before a user gets too used to it. They quite forget that ‘if’ a user chooses to quit Facebook, he can make alternative arrangements to save his data before hand.

It now remains to be seen how Facebook will react to this move.