Data released by comScore, reveals that Facebook has outdone Microsoft, AOL and Yahoo! to become the top display advertisement publisher in the first quarter of 2010. 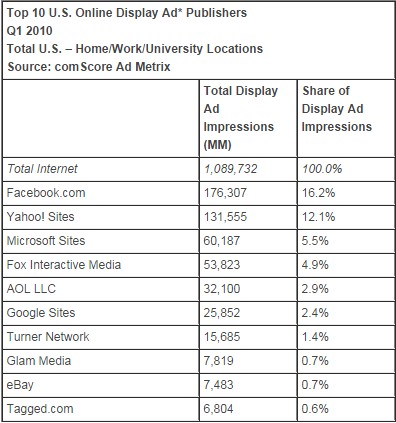 Facebook has, for the first time, overtaken Yahoo! and Microsoft in delivering display ads in the U.S. They served 176.3 billion display ads on their website in the first quarter of this year, which accounts for 16.2% of the total display ad impressions delivered to U.S. home, work and university locations.

Yahoo! on the other hand, has actually dropped from serving 140 billion ad impressions to 132 billion during the same period. Microsoft served 60.2 billion impressions in Q1 2010.

Moreover, while Facebook may have the volumes, the actual revenues earned by Yahoo! and Microsoft through advertising on their Web properties are much higher.

In spite of being far behind in terms of revenue generated, Facebook’s growth is worth noting, as the number of people on Facebook continues to grow and users continue to spend more and more time on the social network. It will most likely be just a matter of time before they establish a more effective way to monetise all this traffic.