By Farhad DivechaOctober 27, 2010No Comments

A similar service was made available by AdMob for the Apple iPhone platform almost a year ago.

Google’s mobile advertising blog explains that the addition of these rich media interstitial units to Android will be an exciting opportunity for mobile advertisers to reach a larger audience.

If this feature can just succeed in getting users to click on the ad more often, it could help in the development of more free apps. For instance, when the game Angry Birds was first introduced on the iPhone and iPad, it was a paid app. But later, when it was introduced on Android, it was free along with some ads, as its developers found that they could make more money through advertising rather than by just selling the game. Now, users get a free game that is paid for by ads. 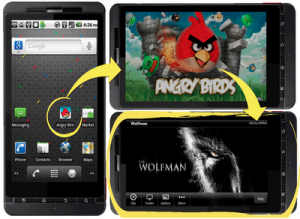 So far, mobile ads have mostly been in the form of text and banners, which do not generate a lot of curiosity from users. However, the new interactive ads could be more interesting.

Google stated that 200,000 new Android connections are now activated on a daily basis, as compared to only 60,000 last February. The number of apps available has also doubled since last May and is now at 100,000.

It will now be possible for advertisers to reach users of the iPhone as well as Android devices through one single platform.