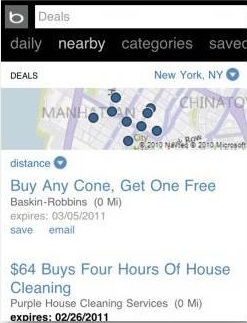 Bing has recently launched a new feature that facilitates local commerce via their mobile and desktop search services. The new feature is shown as ‘Deals’ in the Bing menu.

When users click on ‘Deals’ they are shown a list of the special offers that are currently available in their locality.

Microsoft has started this feature in association with DealMap, which features deals from sites like Groupon, Living Social and Restaurant.com. The feature will offer about 200,000 deals across 14,000 cities.

Since the feature has only just been launched, the service is going through some teething troubles. For instance, a few of the deals being offered have already expired or the deal information may not yet have been optimised for mobile access. Given a little time, it is quite certain that these problems will be ironed out.

Irrespective of the minor shortcomings of this feature, Microsoft is undoubtedly one up on their rival Google as Google has not yet got a similar feature. It has been rumoured, though, that Google plans to launch a similar service called “Google Offers” very soon, which might explain why Bing rushed to get Deals out in the market before it was fully developed to support Microsoft’s own devices.

Microsoft also plans to start a similar service in association with eBay.