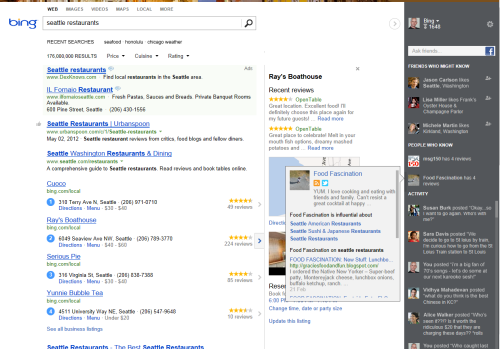 By Farhad DivechaMay 18, 2012No Comments

Microsoft’s search engine, Bing, was given a new facade last week. The change however, is not just visual, but functional as well. With this new design Microsoft hopes to be able to better incorporate social into their search engine.

Not too long ago, Google introduced search plus your world, in an attempt to make their organic search results more social, on the back of Google+. Bing’s new design uses a three-column format to give their users a more social search experience.

On the extreme left is the improved web results column, which provides regular organic search results. The second column is a ‘Snapshots’ column. As the name suggests, this column offers the most relevant information related to the user’s search. It also provides integration with services like OpenTable to allow users to actually take the required actions. The third column is a social sidebar, which includes recommendations by friends and experts related to the user’s search.

Bing director Stefan Weitz spoke to Fast Company recently and said that the change was in response to their need to “reinvent search.”

Bing hopes to be able to use the data available on the net to create apps that will provide instant answers to users so that they won’t have to click through to a Web page to the find the information they require.

Ultimately the target that Microsoft has in mind for the new redesign is obviously to increase their search market share by making a dent in Google’s monopoly. As of now, Microsoft has accumulated losses of about $6 billion since the launch of Bing about three years ago.

Incidentally, it is the owner of Facebook, Mark Zuckerberg, who can be credited with helping to create the new Bing design, as he told the developers working on this project “Don’t try to do social by building social on the side. Build it into the experience.”

Bing’s close ties with Facebook will work strongly in their favour in this case. Unlike Google+, which is still a fledgling, relatively unimportant social network in spite of its claimed high volume of users, Facebook is a truly social network and using the social aspects of Facebook to power Bing gives the new social search engine a lot more credibility than Google plus your world.

Users in the United States were invited to try the new Bing interface yesterday. Let us know what you think of it – will this new feature make you leave Google and start using Bing?