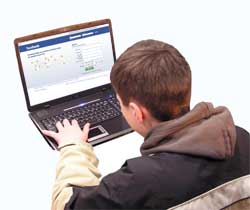 Ridiculous as it sounds, one of the most recent issues surrounding the wold’s most popular social network, is about Facebook Depression.

A recent report released by the American Academy of Pediatrics (AAP), indicates that researchers have proposed a new condition called ‘Facebook depression.

It is believed to affect pre-teens and teens, who are known to spend an inordinately long time on the popular social network, end up feeling depressed because they often believe that they are not as popular as some of their friends, or are not enjoying themselves quite as much as others.

Dr. Gwenn O’Keeffe, one of the proponents of the theory, says that such a realisation for a youngster “can be more painful than sitting alone in a crowded school lunch room” or even more painful than other real-life encounters that can make children feel down.

A lot of professionals have criticised this report. John Grohol of PsychCentral says the report is “at the level of a bad blog post written by people with a clear agenda”. Larry Magid of ConnectSafely.org says that it is a “made up” condition, which is not backed by research.

On the other hand, it has been pointed out that the article that is drawing so much attention is just one paragraph within a very good and informative report on social networks. Proponents of the theory claim that this passage has been taken quite out of context.

While the report about Facebook Depression need not be taken too seriously, it would be worthwhile for parents, paediatricians and counselors to talk to children about excessive use of social networks and other dangerous activities such as cyber-bullying and sexting and the related lack of fresh air and exercise that children who spend hours in front of a computer screen miss out on.