The Value of Wearable Devices Will Soar

By Gary StringerNovember 2, 2012No Comments

According to a recent study from Juniper Research, the next generation of wearable devices will cause the value of the sector to rise rapidly and reach $1.5 billion within the next 2 years. The report, entitled “Smart Wearable Devices: Fitness, Healthcare, Entertainment & Enterprise”, defines a wearable device as “a device which accepts input and processes that input and while being used, is worn on or otherwise attached to the body”. This concept is certainly not a new one, but its popularity has been greatly enhanced by the advent of more advanced smartphones and tablets, which provide users access to an untold number of apps that are able to send information to a desktop or online profile.

The sector is expected to achieve even higher growth in the coming years, with revenue projected to rise from just $800 million this year to a staggering £1.5 billion by 2014. This growth will be driven by the introduction of the next generation of wearable devices and we can already see the plans for a number of these devices shaping up, namely Google’s Project Glass which offers a level of augmented reality that has never been experienced before.

As the title of the report indicates, the rapid rise of wearable devices will be largely caused by interest in fitness, healthcare, entertainment and enterprise and products like the Google Glass could be extremely successful as they offer users high quality experiences in a number of these areas.

Based on the current success of wearable fitness devices, it is likely that they will be a catalyst of the aforementioned growth and achieve even greater success. Such devices can greatly enhance your fitness experience and make it easier to set, measure and achieve your health goals and to gain a greater understanding of how and why, it is a good idea to analyse the efforts of Nike in this area.

Nike have a number of apps and wearable fitness devices that connect wirelessly to mobile phones or upload results directly to an online profile and these have been extremely successful. The Nike+ range offers the ability to track the distance you have covered, calculate the number of calories you have burned, map your runs, time your workouts and many other functions, which has proved popular amongst those aiming to measure their fitness goals more effectively. The range includes wearable devices in a number of formats, but most impressive are the Nike+ Sportband and the Nike+ Training and the benefits of these can be seen below. 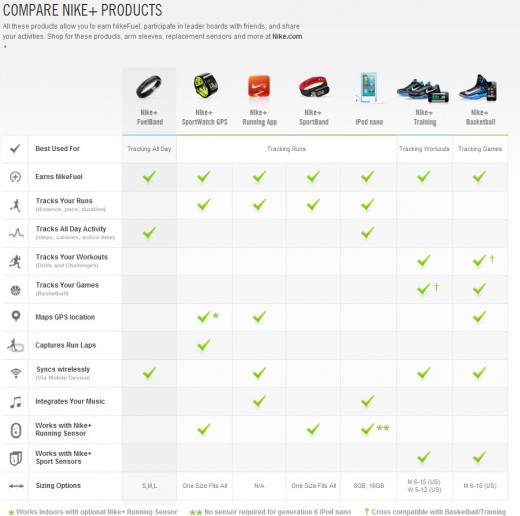