By Jack ThirskNovember 18, 2016No Comments

2016 has been an unstable year in the world, with geopolitical shocks as well as tough issues relating to conflicts in the middle east. It is not something advertisers would ever want to be seen to give an opinion on. Keeping a squeaky-clean image is good for business. A new campaign called Stop Funding the Hate has made news this week however, appealing to companies to stop advertising in certain publications.

The group which started on Facebook aims to convince advertisers not to pay for ad space in The Sun, Daily Mail and Daily Express. They claim that these papers are broadcasting a message of hate and have sighted 2016 as the final straw, with much of the rhetoric surrounding immigration and refugees. 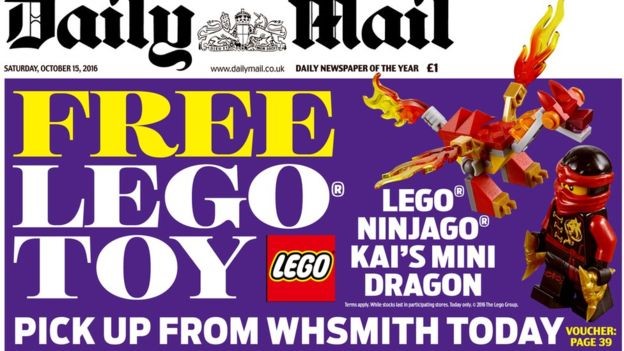 They have seen some success already. Toy giant Lego have already decided not to continue their partnership with Daily Mail of offering of a free toy. Despite the paper claiming that the decision was simply an issue of a contract coming to an end, Lego showed it was indeed a moral decision after tweeting the Stop the Hate campaign directly. “We have finished the agreement with The Daily Mail and are not planning any future promotional activity with the newspaper”.

John Lewis have been the most recent large retailer to be targeted by the group. They released a statement on the subject. “We fully appreciate the strength of feeling on this issue but we never make an editorial judgement on a particular newspaper.” Critics have said that advertisers are making an editorial judgment every time they decide to place the adverts next to the news articles.

Gary Lineker is the highest profile person to get involved in the debate. He took paticular issue with the covering of the refugees coming to the UK. He is not only known for football and presenting though. He is the face of Walkers crisps who have advertised in the newspapers he proports to disagree with. When questioned on this by a Daily Mail journalist he revealed he has already talked to the company about their advertising policy.

There has been backlash by the newspapers being subjugated of course. The Sun ran articles on why Gary Lineker should be sacked as presenter of Match of the Day due to the BBC having strict non-political opinion rules. Ironically a counter movement has started for him to be voted the best presenter at the National Television Awards in January, a show that just so happens to be sponsored by The Sun.

Journalism as an industry has also had something to say and pointed out the hypocrisy and danger of the ‘Stop the Hate’ campaign. Editor of the Worcester News John Wilson has come out against the campaign, but not to justify the specific newspaper’s editorial decisions. “Do they (Stop the Hate) not see that the biliousness of their own attacks on tabloid newspapers undermine their claims to be champions of a fairer society? Are they not as guilty of fomenting hatred as the subjects of their ire?” Wilson was talking to Hold the Front Page, “Questioning what newspapers say is healthy; depriving them of their ability to say it is downright dangerous.”

The battle will no doubt heat up as advertising spending increases as Christmas gets closer. Advertisers will feel the pressure to maintain their marketing campaigns whilst treading the tightrope of PR and avoiding having an opinion. Lego are in a strong enough position to be safe from any negative affects to their business, but the British supermarkets might be less so forthcoming with an already crowded market becoming increasingly competitive. Any advantage such as national newspaper advertising will be key for them to keep their heads above water.