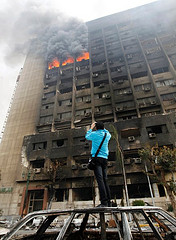 By Farhad DivechaJanuary 31, 2011No Comments

Protestors in Egypt are using various social platforms such as YouTube, Facebook and Twitter as well as mobile communications to spread their message to the outside world.

The Egyptian protests, which started last Tuesday, have been gaining ground. The opposition in Egypt declared January 25 as a “Day of Rage” to end the 30 year rule of President Hosni Mubarak.

People with varying ideologies ranging from Islamist to Communists and Secularists have come together for this protest. They have been gathering in huge numbers on streets and squares. They have been shouting and burning symbols of the dictatorial government.

The government, for its part, is doing all it can to subdue the protestors. They have set out the secret police as well as the riot police. They have resorted to using water cannons and even assaulting the public.

Egyptian government officials have also tried to deactivate the mobile towers and block sites such as YouTube, Facebook and Twitter, which are being used for propaganda.

While they have succeeded in blocking communication channels to an extent, they have not been entirely successful in doing so. Users are still able to access Twitter in English, Arabic and French. Mobile phones are also partially functional. Photographs and videos of the protests which have been uploaded are being sent around the world by supporters of the uprising.

A curfew was imposed in the country on Friday, but it was defied. The riots have reached such proportions that the police were eventually forced to retreat and the army had to be called out to control the situation for the first time in 25 years.

Update: Google has joined in on the fray by enabling Egyptians to call a local number in order to tweet about the uprising. The new service has been introduced via SayNow, a company that Google bought just last week.