About 3 months ago, Craig ‘Lazie’ Lynch escaped from a prison near Suffolk in England, where he was being held on charges of burglary with a weapon. Since then, he has been using his Facebook profile page to taunt the police regularly.

Hollesley Bay prison, where Lynch was being held is an open, or minimum security prison. Moreover, Lynch was near the end of his sentence and was out on a day pass to help him integrate back into society. The act of escaping was not particularly daring.

What is really daring, however, is the fact that instead of trying to stay out of the limelight he has drawn a lot of media attention towards himself.

Lynch keeps posting recent pictures of himself, along with details about his meals or his plans for the day. He also makes rude comments about the police regularly on his Facebook Page.

During Christmas, he wrote about how he would take his “little princess” to a particular mall, so she could meet Santa Claus. Some time later, he added another update saying that he was already in that mall and was walking around with a big Winnie The Pooh in his hands. He later mentioned his plans to attend a New Year’s Eve party to be held in Lowestoft, Suffolk.

The police, on their part, have claimed to be working with Facebook to track down the IP address from which he operates and hope to catch him soon.

What seems really appalling however, is the fact that he has collected over 40,000 fans who regularly view his profile page and send him fan mail. People have even designed T-shirts and a song in his honour!

Some other Facebook users have been sending him hate mail, and trying to remind his fans that they are honouring a criminal. On his part, Craig Lynch has asked these “haters” to get off his back and to stop saying that he hit and robbed an old lady, as he claims to have done no such thing. 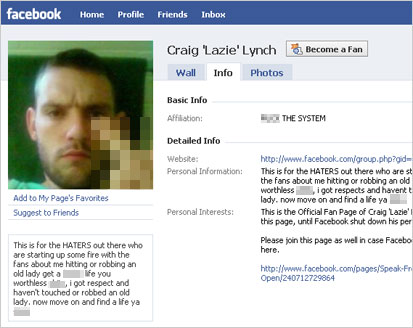