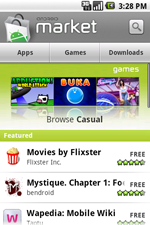 By Farhad DivechaMarch 4, 2011No Comments

Apps found on the Android Marketplace have been recently infected by hackers. It has been estimated that between 50,000 and 200,000 people have downloaded these infected apps.

The Android virus was discovered by a Reddit user, ‘Lompolo‘, who found a programme to play the guitar on a mobile phone, supposedly written by a person whom he knew was not the actual author of that programme. The app contained a virus code, which he found in 21 other apps, though many more could actually have been affected.

The virus, known as DroidDream, can send sensitive information such as the unique ID of a phone or a password to any other server.

Gingerbread, the latest version of the Android OS, is not susceptible to the DroidDream virus.

In addition to removing the affected apps from the Android Marketplace, Google has also suspended three accounts used by that developer. They have, however, not issued a formal statement about the rogue apps.

It has been pointed out that such rogue apps are one of the negative effects of the open nature of the Android OS.

Coincidentally, last week also saw a major attack affect the London Stock Exchange (LSE) site. According to the investigations conducted, it was found that the damage was done when a third-party advertiser, Unanimis, was hacked.

Though the site had been blocked on Firefox it was accessible through Chrome. Once a user accessed the site, pop-ups started appearing on their own and indicated fake virus alerts. A fake security scanner claimed to detect a lot of malware.

When Google’s safe browsing service crawled through the site, they found that it had been compromised at least 6 times in the last 90 days, and over 363 pages of the 1,112 scanned by them had been affected.