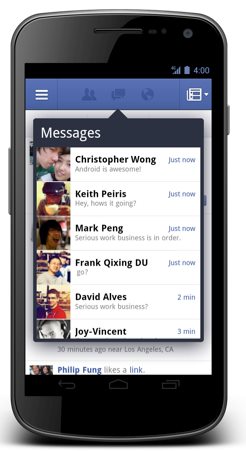 By Farhad DivechaDecember 8, 2011No Comments

Facebook has just launched a major update for their Android app. The update brings the app closer to the experience of browsing Facebook from a computer and delivers content much faster than the older versions of the app

The very first thing users will notice about the Facebook app is that it looks and functions a lot more like the website. Notifications are immediately visible and layers are used to provide instant views of friend requests, messages and notifications.

Facebook’s old Android app was notoriously slow, had multiple screens each of which took long to load even for simple functions and did not have a very intuitive interface. Even something as fundamental as viewing pictures and commenting on them was hidden and required users to know exactly where to touch to show the comment option.

It is now much quicker and easier for users to share photos, and messages as well as to navigate. According to a post on the Facebook blog, with this new app, photos and albums will be twice as fast as before. It will also be easier for users to edit their captions and view comments, both of which were tricky features to use in the old app.

Messages and notifications will now be placed at the top of the page, so users will be able to access them and respond tot hem without leaving the page.

Similarly, a new menu button on the top left corner of the app drops down a menu that enables users to access their news feeds, groups, games and apps with a single click, instead of having to leave the news stream and then go to the main menu.

These new features are for Android 1.8 and require Android 1.5 or later versions. The app continues to be available for free on the Android Market and still does not feature any Facebook ads.

Given that over 350 million active users (43% of Facebook’s total user base) currently access Facebook through their mobile devices, the platform is extremely important for the social network. It is no wonder then, that they would strive to make the user experience as good as it is on desktops.

It will also be no surprise when they do start monetising the medium and launch a mobile advertising service.