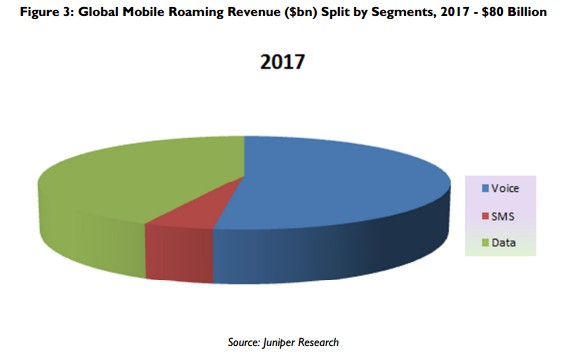 Mobile service providers will see mobile roaming revenues soar over the next 5 years, according to a recent study by Juniper Research on the future of mobile roaming and usage. An increase in mobile data usage abroad and a reduction in roaming charges will see revenue rise from $46 billion this year, to a staggering $80 billion in 2017 and this will mean that mobile roaming will account for around 8% of total revenue for the majority of operators. At a time when many operators have seen revenues fall in domestic markets, international mobile roaming is a great source of profit and should enable operators to compensate for the falling profitability of their native markets.

Using mobiles abroad has become increasingly more popular and also more vital, especially for those conducting business abroad and as a result the price of mobile roaming has fallen quite significantly. It is likely that this trend will continue, with the ever growing reliance on mobile roaming causing multinational operators to lower prices even further and this greater usage should see profits rocket. However much of the ability to use mobile roaming depends on whether multinational operators can agree deals with smaller international networks across the globe, allowing users to connect to these networks when they are travelling abroad. Yet with the use of mobile phones abroad rising, these smaller, and often domestic, service providers would be stupid to turn down the business of these multinational corporations.

As the graph above shows, data usage will become much more profitable and a greater proportion of total revenue will be generated by mobile data roaming in 2017. Many operators currently offer a capped price on data usage, which limits the amount spent on roaming abroad and ultimately reduces expenditure and the cost of mobile phone bills. This has largely been a driver of the rising use of international data roaming and it is likely that all mobile operators will have adopted this approach by 2017, although this will reduce the spend in a sense, it will also encourage more people to use mobile roaming and act as a catalyst for the growth discussed in the aforementioned research.