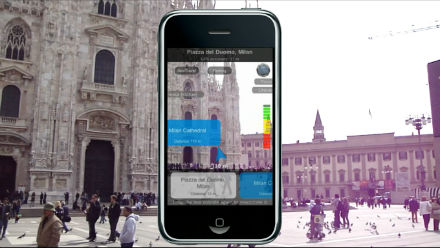 The Future Of Mobile Augmented Reality

By Gary StringerAugust 31, 2012No Comments

The popularity of mobile augmented reality (AR) has risen in recent years and this greater exposure and success is set to bring about a number of changes to how it is used. The concept has altered dramatically in terms of usage, as companies attempt to move away from a reliance on location based services and create niche offerings for their desired audience.

Previously the overlaying of data onto the real world was largely triggered with information on location, which made it extremely popular amongst travel companies, including Lonely Planet and TripAdvisor who used it within their apps.

Experts stated that the reason that they were able to successfully harness the power of mobile AR is the fact that we have the least knowledge when we are placed in completely new environments, which enabled the aforementioned companies to flourish by offering interactive data. For example, TripAdvisor’s AR mobile app enables users to take a photo of their surroundings, which is then used to make a number of suggestions for nearby attractions and restaurants in a map format.

However, as mentioned above, there has been a diversification within mobile AR and it is now largely used in other industries, with less dependency on location and this has created a bright future for augmented reality apps.

The latest mobile AR report from Juniper Research, who have published 2 previous versions, predicts growth for mobile AR and has also determined the key opportunities within the market. The industry as a whole is expected to grow to a total revenue of $5.2 billion between now and 2017, as other areas begin to achieve similar success to location based augmented reality. 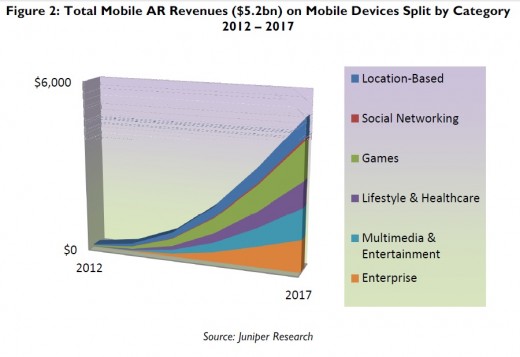 Social networking and games are predicted to grow rapidly over the next 5 years and this could lead to a far more engaging experience for users, whilst the increasing use of mobile AR within healthcare could also aid industry expansion. Developments in these areas are likely to increase exposure and awareness, which has been a key barrier to the widespread success of mobile AR and this should see more rapid growth.

One key issue must be addressed in order for mobile AR to become more successful and this is the quality and usability of apps, as a failure to meet user expectations is often the key reason that many companies AR strategies fail.

One of the principle  barriers to widespread usage has been an insufficient number of technologies that are compatible with mobile AR, however more powerful mobile phones and tablet devices are improving the consistency of augmented reality applications.